Wings of Angels: A Tribute to the Art of World War II Pinup & Aviation Vol.2 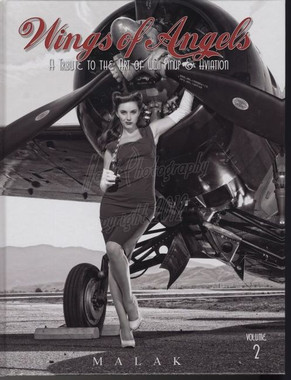 Note: The low resolution scan, shown above, does not capture the high clarity of the actual item.

Note: The watermark text on the photos does not appear on the actual item.

Michael Malak is a well known professional photographer and artist, specializing in 1940s style Hollywood glamour photography and WWII pinup photographic recreations. Named "The New Hurrell" by his peers, having mastered the intricate lighting and photographic techniques of the 1940s golden age master of photography, George Hurrell, Michael’s biggest inspiration of all time. In 2011,

Michael had the pleasure and privilege of photographing the beautiful Claire Sinclair, Playboy’s Playmate of the Year 2011, as well as doing commissioned works of her for MGM Grand and Crazy Horse Paris. Michael has been sought after by many, including Disney Imagineering, for private commissioning, as well as by several exclusive art galleries around the world.

He has also created calendars for the world’s largest vintage lingerie retailer "Secrets in Lace" for 2012 and 2013, utilizing images from the "Wings of Angels" photo shoots. He has been featured in multiple publications, such as the February 2012 edition of Front Row Magazine, Art Issue. Michael currently resides in Southern California with his family.

"I took photography in high school and never felt much for the overall film process. I learned most of my artistic skills and creativity from my art teacher of four years. She taught me about foreground, shadowing, and perspective. She pushed me outside of my comfort zone and taught me new artistic techniques that I would later apply to my photography.

"I have always loved the 1930/40's period for the way everything was made. Built to last! Made in the USA meant something.

"I do offer two styles of photography. One is the 1930/40's Hollywood Glamour, Film Noir and the WWII Pinup (Nose Art) style photography. I do own all branches of service uniforms from WWII, props, bomber jackets and three parachute rigs, one with full functioning cord lines and silk. Vintage 1930/40's dresses, furs, hats, and wardrobe are also owned by me.

"George Hurrell is my all time inspiration and favorite photographer of the 1930/40's. His work is truly inspiring to view.